Hill of Crosses and Skirsnemunė churches 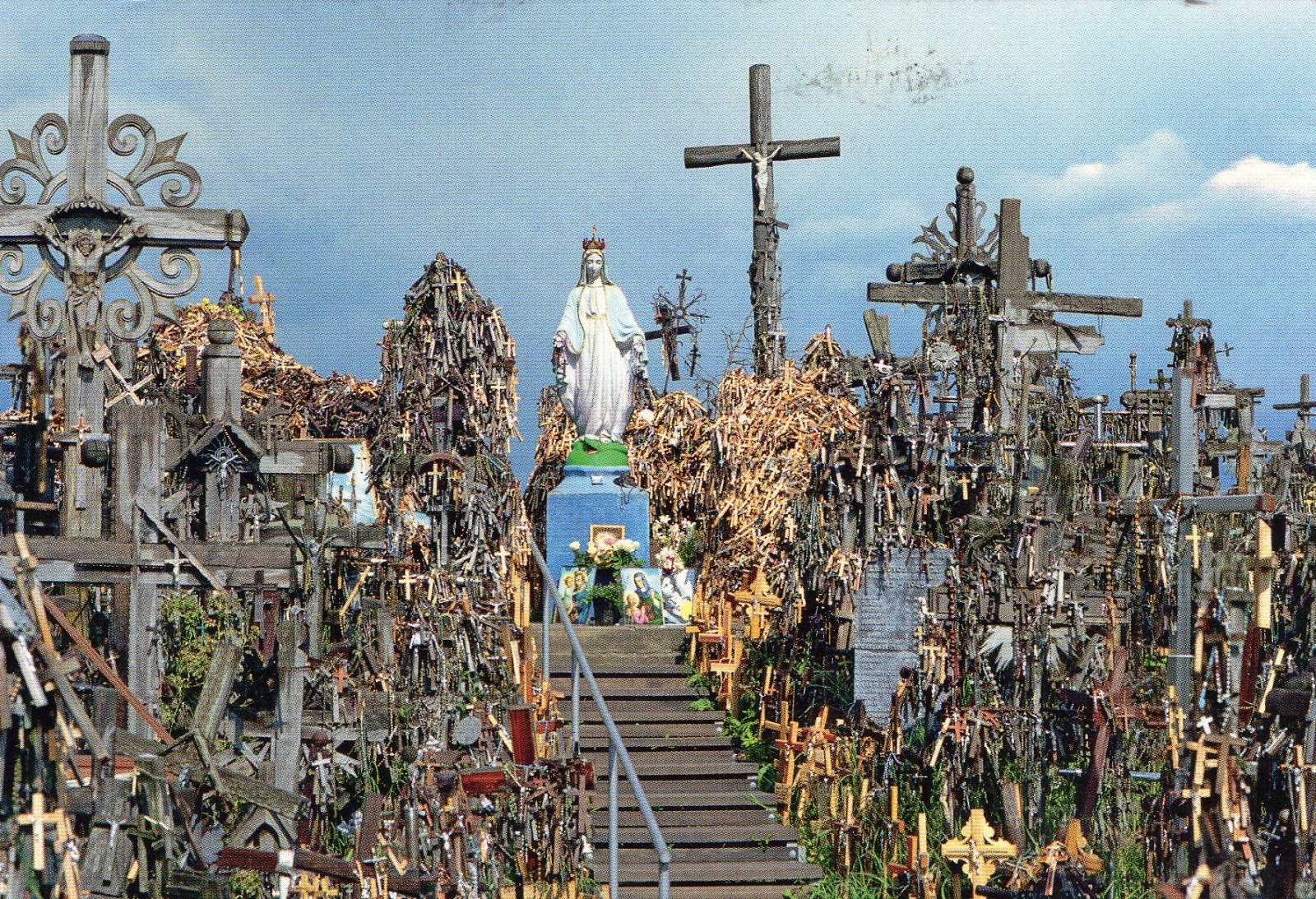 Hill of Crosses, Siauliai
The Hill of Crosses is a site of pilgrimage about 12 km north of the city of Šiauliai, in northern Lithuania. The precise origin of the practice of leaving crosses on the hill is uncertain, but it is believed that the first crosses were placed on the former Jurgaičiai or Domantai hill fort after the 1831 Uprising. Over the centuries, not only crosses, but giant crucifixes, carvings of Lithuanian patriots, statues of the Virgin Mary and thousands of tiny effigies and rosaries have been brought here by Catholic pilgrims. The exact number of crosses is unknown, but estimates put it at about 55,000 in 1990 and 100,000 in 2006.
From Rita, Lithuania
More here

The neogothic Church of St. George was built in 1903 and the Evangelical Lutheran  Church has been in use since the middle of the 19th century. 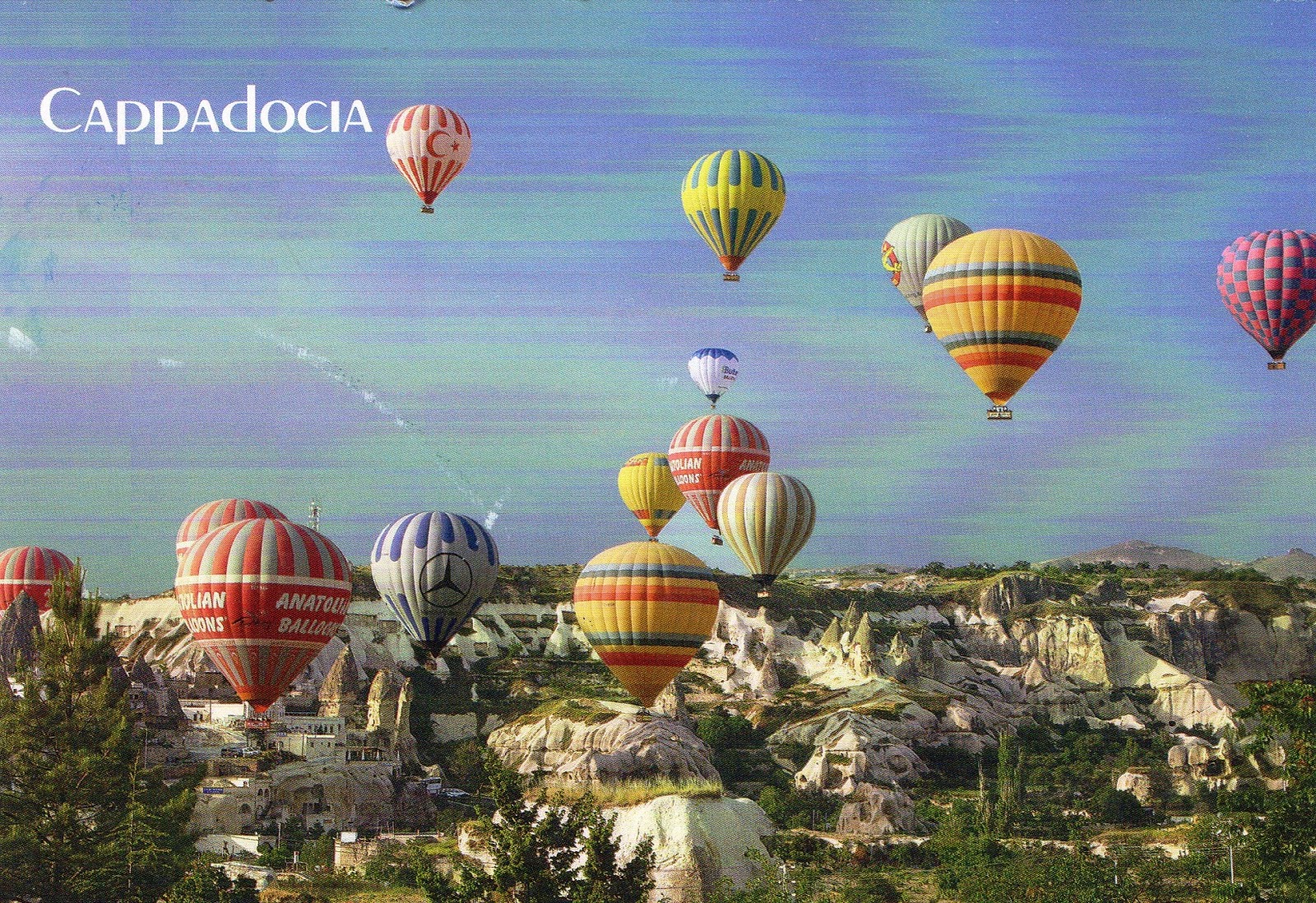 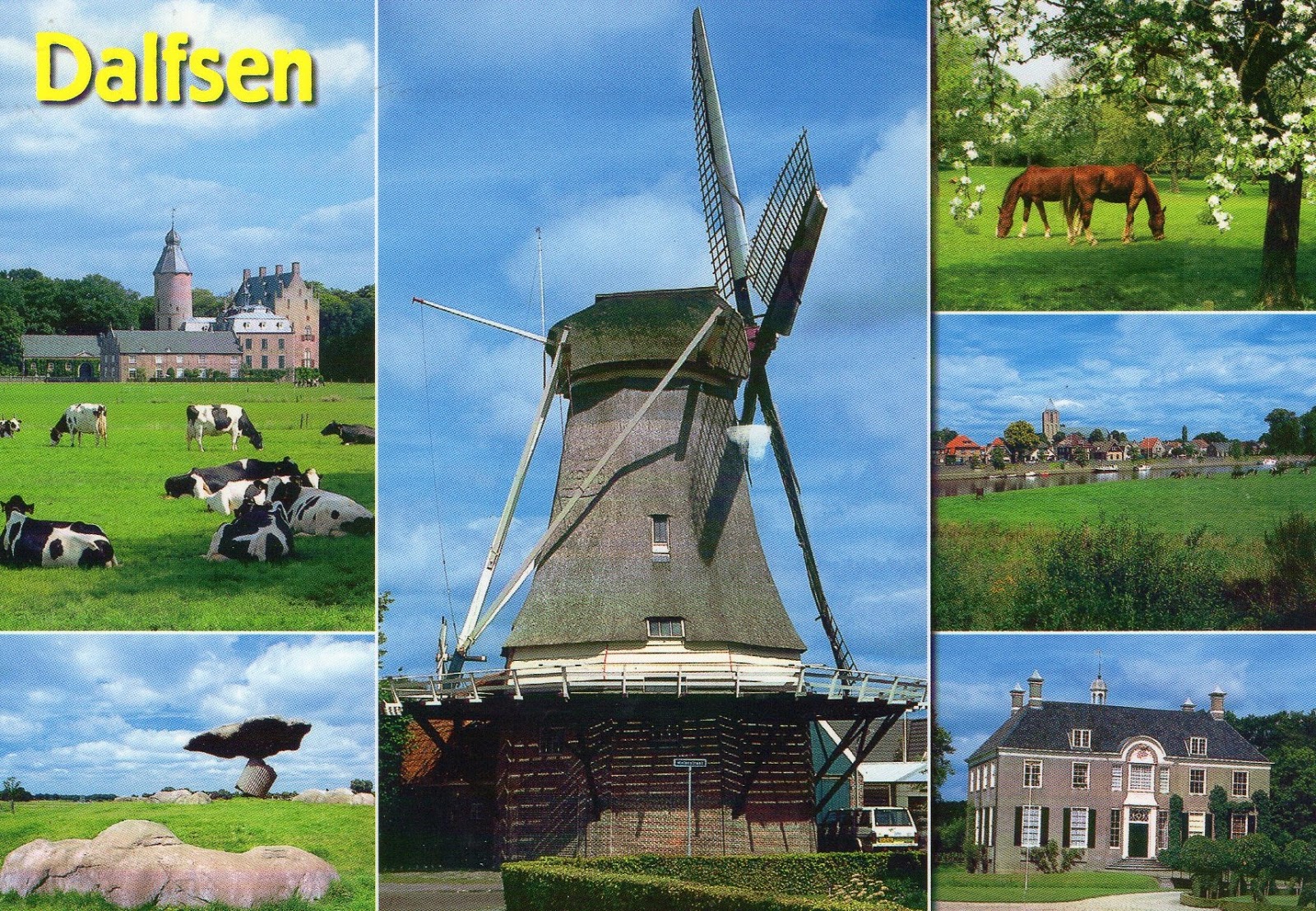 Mirjam sent a card from the place where she lives.
Dalfsen is a municipality and a town in the Salland region of the Dutch province of Overijssel. 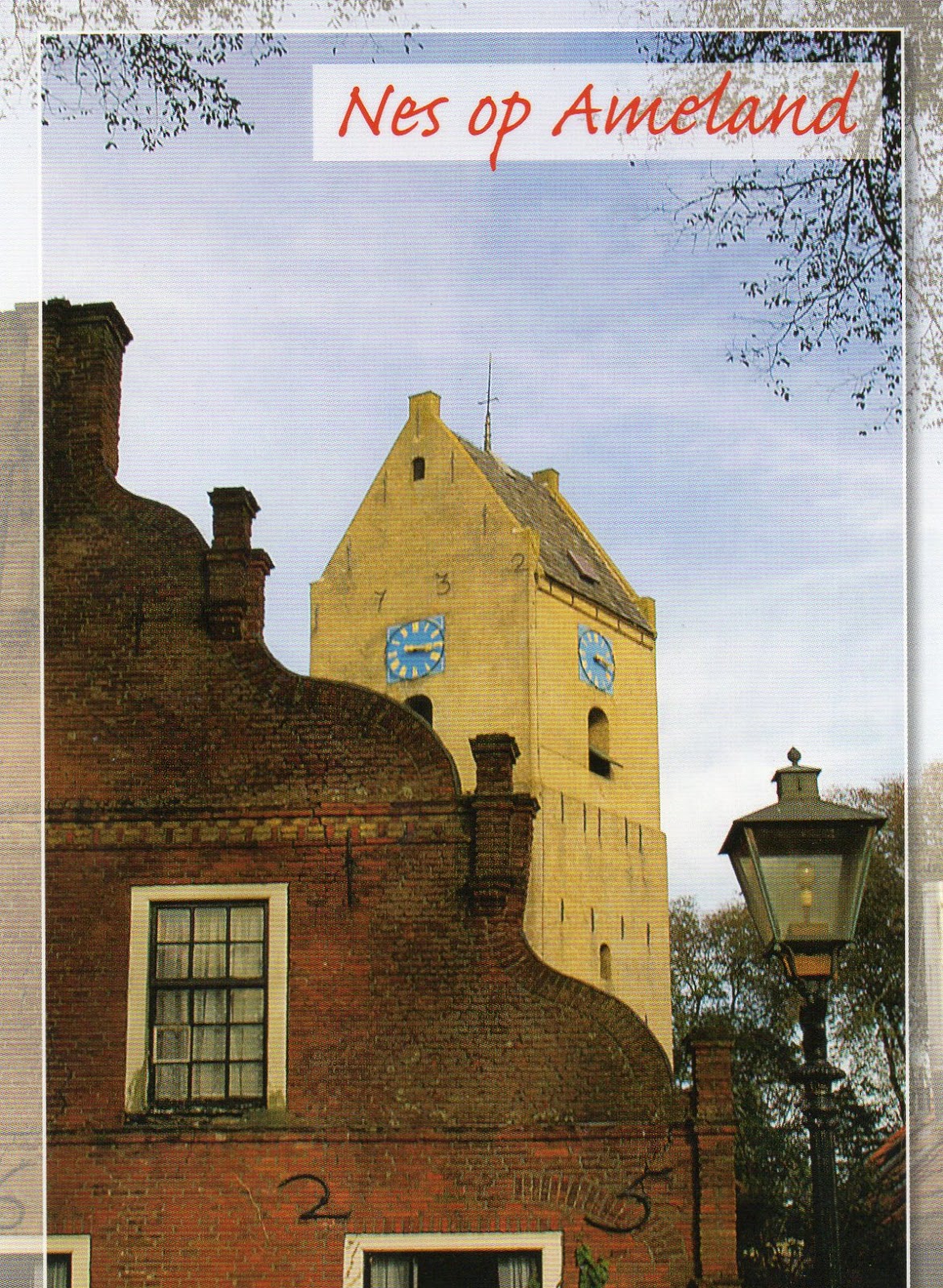 Postcard shows an old chocolade atelier from year 1625 and  the Catholic Church in Nes on the island of Ameland. Nicole  lives near this island, it takes about 45 min for to get there.

Nes is the second largest village on the island of Ameland, one of the West Frisian Islands in the northern Netherlands. Nes has  become a popular tourist destination, as the place where the ferry from the mainland arrives. 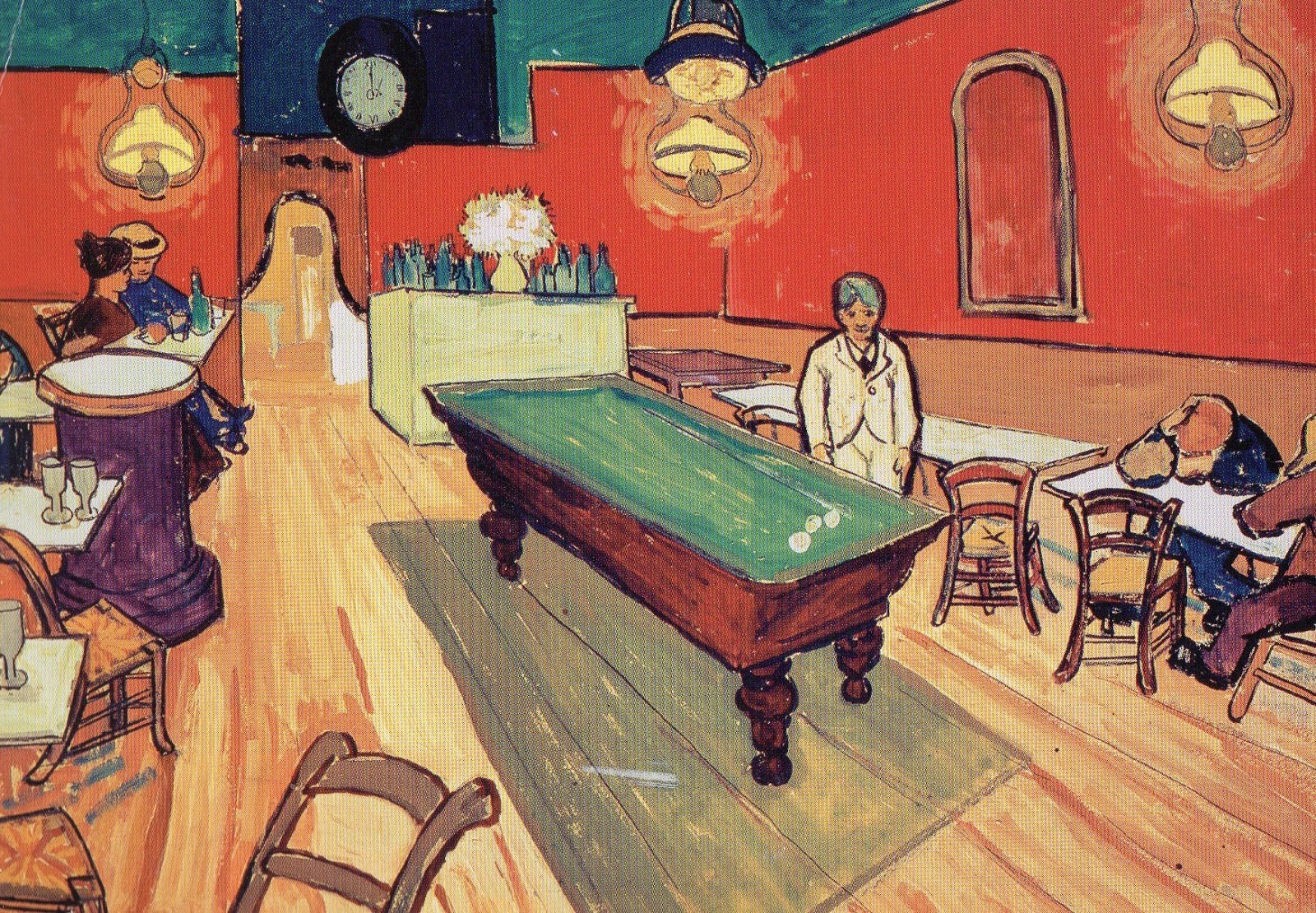 The Night Café in the Place Lamartine in Arles is one of Vincent van Gogh's best known paintings from his Arles period. The work depicts the interior of the Café de la Gare, an all night tavern owned by Joseph-Michel Ginoux and his wife Marie.

Vincent Willem van Gogh (1853 – 1890) was a major Post-Impressionist painter. He was a Dutch artist whose work had a far-reaching influence on 20th-century art. His output includes portraits, self portraits, landscapes and still lifes of cypresses, wheat fields and sunflowers. Van Gogh drew as a child but did not paint until his late twenties; he completed many of his best-known works during the last two years of his life. In just over a decade he produced more than 2,100 artworks, including 860 oil paintings and more than 1,300 watercolors, drawings, sketches and prints. In October 1888, Gauguin went to Arles on Vincent van Gogh's invitation, to try and build up an artists' community which van Gogh. At Arles, Gauguin and van Gogh worked on the same subjects. Café at Arles. Gauguin re-interpreted Van Gogh's two paintings by joining together the Night Café and the Portrait of Madame Ginoux.

Eugène Henri Paul Gauguin (1848 –  1903) was a French Post-Impressionist artist who was not well appreciated until after his death. Gauguin was later recognized for his experimental use of color and synthetist style that were distinguishably different from Impressionism. His work was influential to the French avant-garde and many modern artists, such as Pablo Picasso and Henri Matisse. 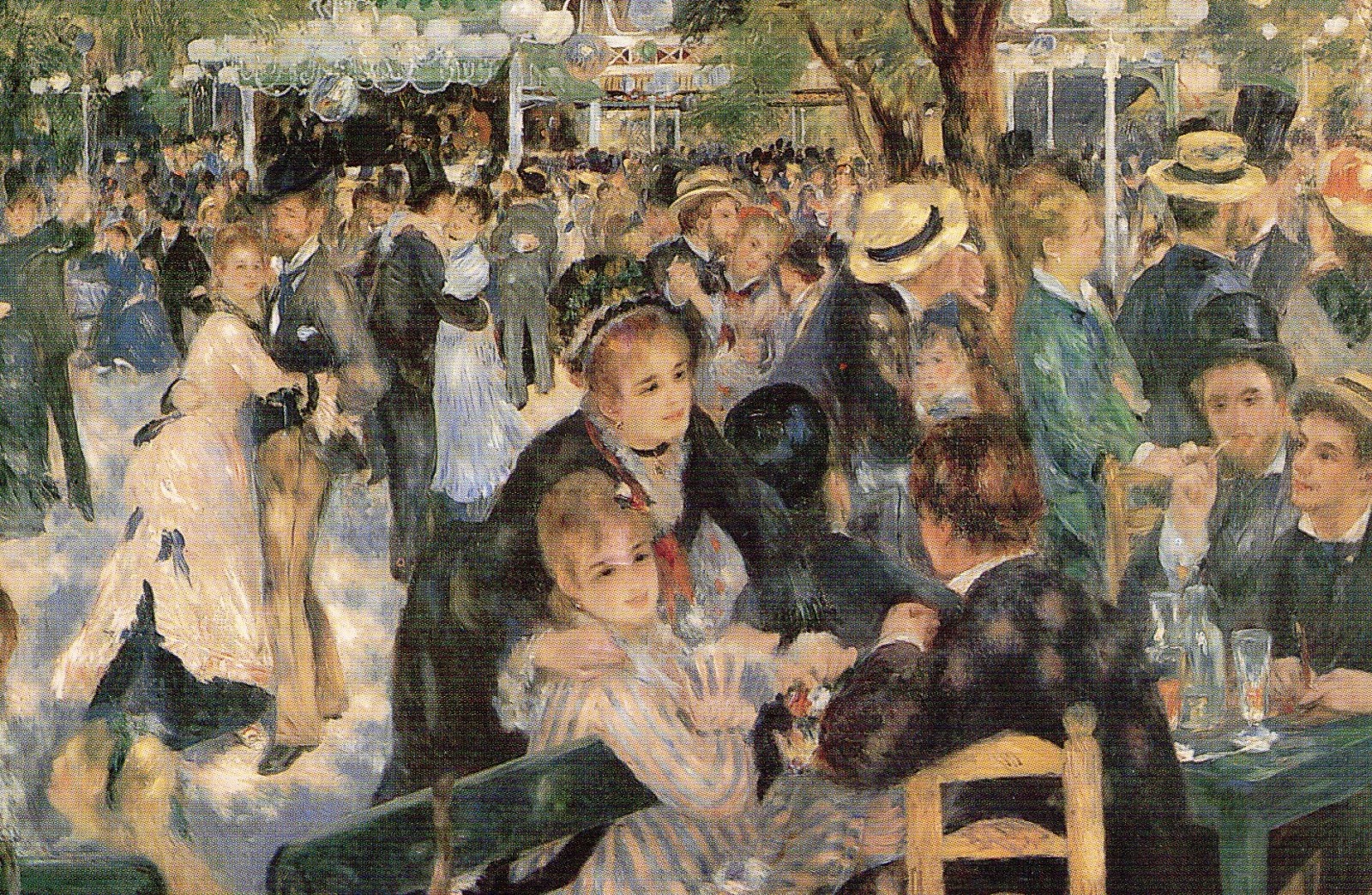 Pierre-Auguste Renoir, commonly known as Auguste Renoir (1841 – 1919), was a French artist who was a leading painter in the development of the Impressionist style. As a celebrator of beauty, and especially feminine sensuality, it has been said that "Renoir is the final representative of a tradition which runs directly from Rubens to Watteau.

Dance at Le moulin de la Galette is housed at the Musée d'Orsay in Paris and is one of Impressionism's most celebrated masterpieces. The painting depicts a typical Sunday afternoon at Moulin de la Galette in the district of Montmartre in Paris. In the late 19th century, working class Parisians would dress up and spend time there dancing, drinking, and eating galettes. 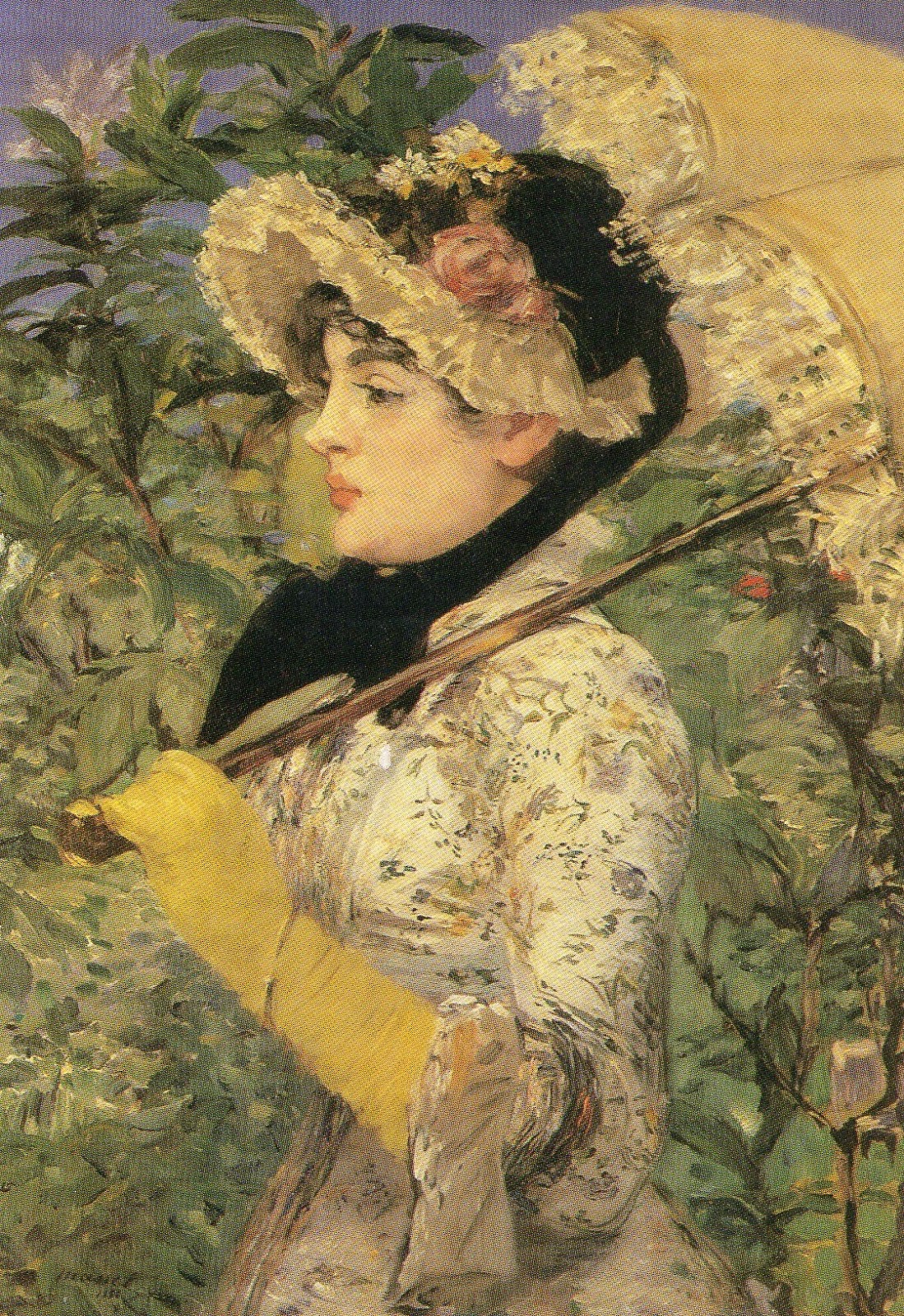 Edouard Manet: Jeanne, Spring, 1881
From Norbert, Netherlands
Édouard Manet  (1832 - 1883) was a French painter. He was one of the first 19th-century artists to paint modern life, and a pivotal figure in the transition from Realism to Impressionism.
Jeanne de Marsy was a French actress during this time period and is the model for Manet's painting. 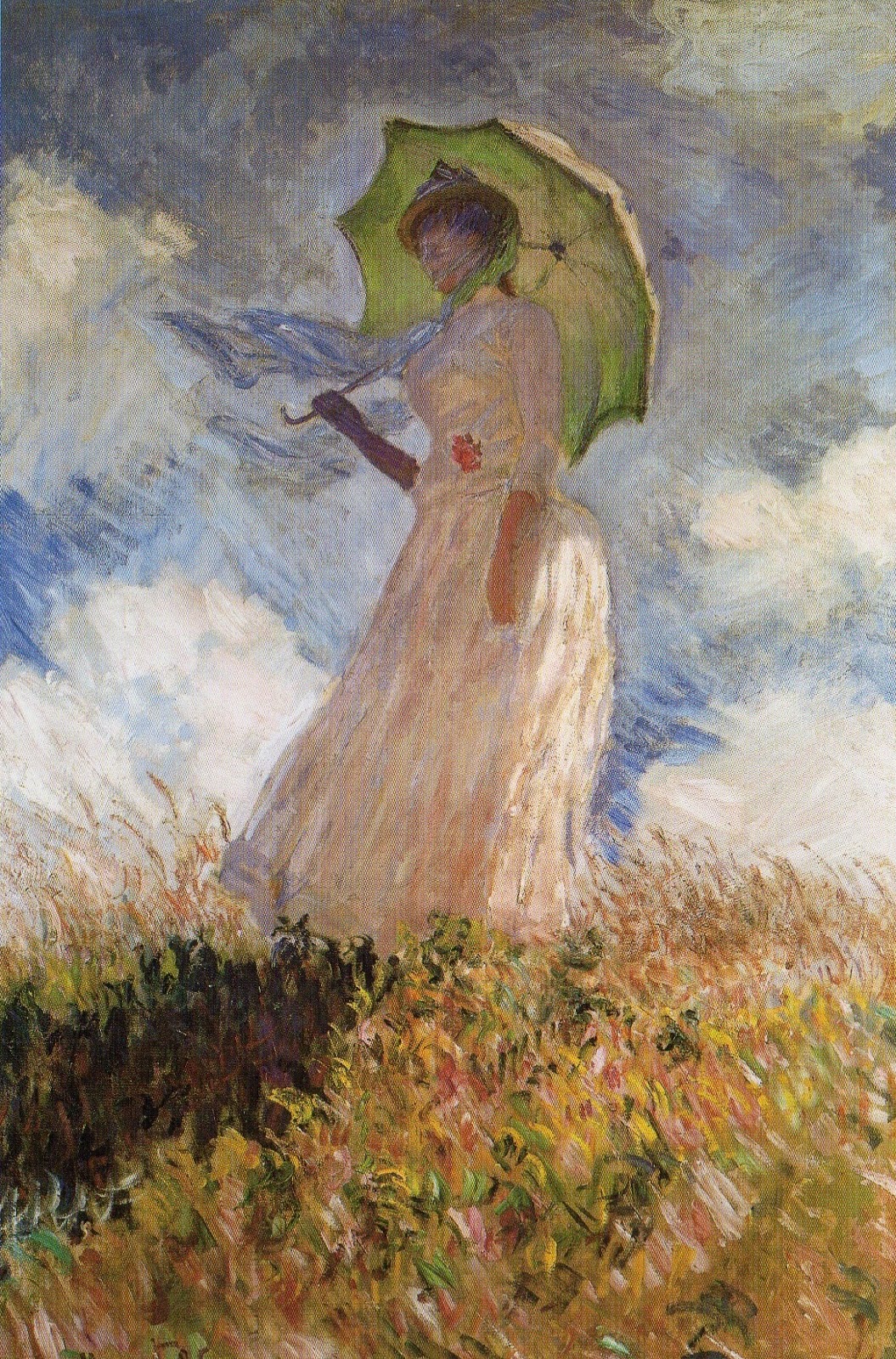 Oscar-Claude Monet (1840 - 1926) was a founder of French Impressionist painting, and the most consistent and prolific practitioner of the movement's philosophy of expressing one's perceptions before nature, especially as applied to plein-air landscape painting.

The woman stands on a riverbank against a background of pale blue sky. The young woman in picture is Suzanne Hoschedé, one of the daughters of Alice Hoschedé, who was to become Monet's second wife in 1889. His future stepdaughter Suzanne was to be for a long time one of the painter's favourite models.